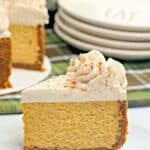 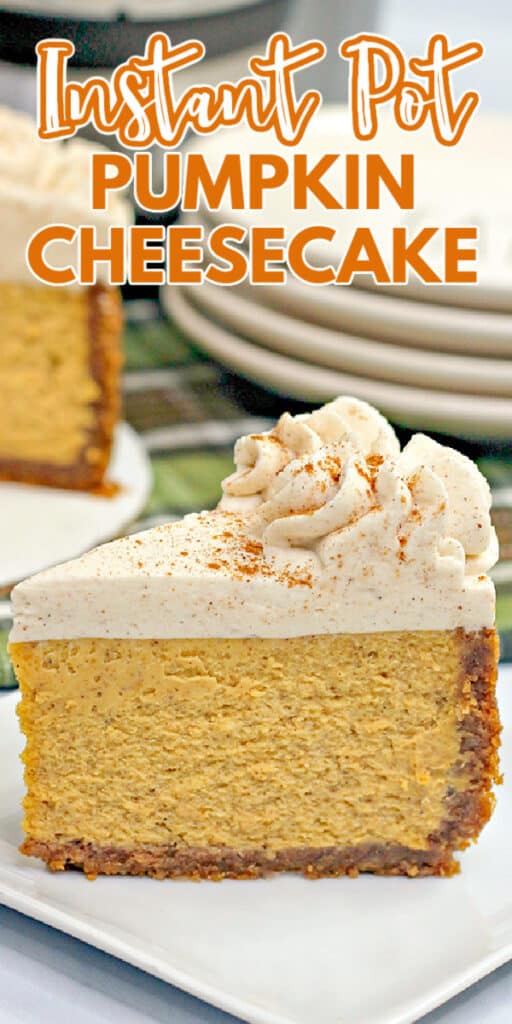 If you are a fan of the Instant Pot, I have a few more pressure cooker cheesecake recipes for you to check out. Instant Pot tiramisu cheesecake, pina colada, salted caramel cheesecake, or try my caramel apple cheesecake.

This is such an easy instant pot pumpkin cheesecake recipe! I know cheesecake can seem intimidating but trust me, this recipe really works. And, within a handful of steps you will be turning the Instant Pot on and letting your creation get to cooking.

How to make Pumpkin Cheesecake

Crust | This recipe uses a graham cracker crust that you mix with brown sugar, cinnamon, nutmeg and ginger. It is going to give the crust warm spices to tickle your tastebuds. It beats just a plain crust any day of the week.

Filling | Since this is a pumpkin cheesecake you will use all the classic cheesecake ingredients along with pumpkin puree, and your fall inspired spices. Then pour the mixture into your pan on top of the spiced crust.

Cook | Make sure to cover your cheesecake tightly with aluminum foil to prevent any condensation from leaking in as it cooks.

Chill | Chill your cheesecake in the fridge overnight once it has cooled down for a bit on a cooling rack.

Whipped Topping | Once your cheesecake is set up you can add your cinnamon whipped topping. Just a few minutes is all it takes to make. And trust me it is worth making to elevate the flavor even more to this cheesecake.

How to freeze the instant pot pumpkin cheesecake

For freezing cheesecake, I love to pre-slice my cheesecake. Then place little squares of wax paper in between the slices. So when you want a slice or two from the freezer, you can remove them easily without having to slice a frozen hard slice off your cheesecake.

I would recommend leaving the whipped cream off for freezing unless you place the slices standing up on a wax paper/parchment paper lined baking sheet and freeze until firm. Then once firm, wrap and store in a container or storage bag.

To freeze cheesecake, first, wrap tightly and well in either plastic wrap or foil or both. Then place in an airtight container or large freezer bags. Then store in the freezer for up to three months if stored properly.

How do I know when my instant pot cheesecake is done?

Instant Pot cheesecake will have a slight jiggle in the center when you gently move it on the counter. If you find it is really wiggly and it is more than just the center you can cover back up and re-cook for 5-10 minutes longer if you feel it is needed.

You can re-cook the cheesecake without a problem even after waiting for the natural release to finish.

Can I Swap Crust With A Gingersnap Crust

It would be a great swap and would compliment the pumpkin flavor from the dessert. 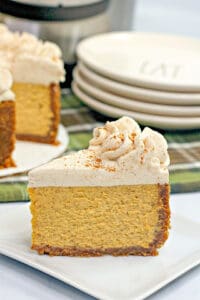 Print Pin It!
No ratings yet

Hi, I'm Miranda! I'm a cookbook author, cheesecake lover, and crazy cat lady. I'm a mama bear to that little handsome devil in the photo above and a wife to the man I fell in love with in college.